ClickHouse, on the other hand, as an analytical database, is the right choice for performing these operations with its features such as columnar storage and data compression. These features of ClickHouse are very beneficial in terms of performance and cost.

Many organizations need to be able to analyze and visualize the metrics in near real-time on a dashboard. A traditional ETL process runs overnight after the end of the business day and transfers the data from Transactional databases to Analytical Databases. Then aggregation is performed so the metrics can be visualized in BI tools like Superset, Tableau, and others.

MySQL or PostgreSQL will not be enough products for businesses that need to process important, critical data quickly and companies that need to process their data in a real-time environment. Instead, an ETL solution that continuously pushes changes from transaction databases to OLAP(ClickHouse) would be ideal.

The solution to this issue comes with the ClickHouse Sink Connector tool provided by Altinity.

The work is completely open-source and is licensed under Apache 2.0. Altinity encourages you to try the project and participate in its development. Participation could include testing (issues), ideas (discussion), and code contribution (Pull Requests). It’s the same pattern Altinity follows for all open-source projects we run or maintain.

Even though the main goal was to replicate data from MySQL to ClickHouse, we also wanted to develop a solution that would make it easier for Engineers to configure, deploy, maintain and operationalize this solution efficiently. The following is the list of objectives for developing this new solution. 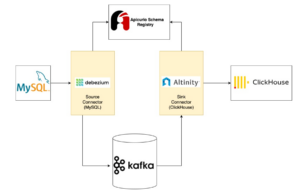 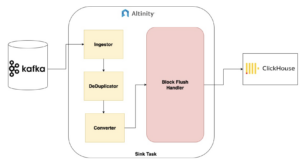 Ingestor: Ingestor is responsible for ingesting messages from Kafka. In addition to the ingestion functionality, the user configuration is also parsed by this component. Here is the list of all the configuration parameters supported by the connector – Sink Configuration.

DeDuplicator:  We have explained in detail the drawbacks of duplicated data in the pipeline. This component creates a session window of messages and removes duplicates in that window based on the primary key. The window duration is configurable by the user.

Converter: This component very similar to the converter functionality of Kafka connect is responsible for mapping the data types from Kafka Connect/Debezium to Clickhouse data types.

Block Flush Handler: This component creates blocks of data that is then passed on to a background thread which flushes the data to ClickHouse using the JDBC Driver. The block can be configured by either the size in bytes or time duration.

All the components of the Altinity Sink Connector for ClickHouse can be set up locally using Docker-Compose. Below are the instructions for setting up the Docker compose environment.

The following services are included in the Docker compose file

Pre-requisites: Docker and Docker compose need to be installed.

Clone the repo with the following command.

Run docker-compose to start all the docker components.

Add MySQL connector: If you wish to connect to a different MySQL instance, you can update the connection information in the following file before executing it.

After the docker components are up/running, Kafka connectors(Source and Sink) need to be created. Execute the script to add MySQL connector to Kafka connect

If you plan to connect to a different ClickHouse server, then update the connection information in the following file.

Find the Sink container section and change the image tab with the information given in the below.

Secondly, find the ClickHouse container and change “soft” and “hard” parameters with the information given in the below.

Today, especially open source software is frequently encountered. We hold and process our data on these software or databases. At this point, we want to replicate, protect or process our data in these tools. One of the solutions for this has been solved with the ClickHouse Sink Connector that Altinity company has prepared. Sink Connector helps you to send your MySQL data to ClickHouse via Kafka. You can try this completely open source tool and contribute to its development.

In the part 2 of this blog we will demonstrate some of the features of Sink Connector with a larger data set.

About Can Sayn 13 Articles
Can Sayın is experienced Database Administrator in open source relational and NoSql databases, working in complicated infrastructures. Over 5 years industry experience, he gain managing database systems. He is working at ChistaDATA Inc. His areas of interest are generally on open source systems.
Contact: Website