As a long-term Perconalive veteran, the most recent Perconalive was more than an Open Source Database conference. It meant to be reunited with thought leaders of open source databases; it meant to be there, learn and listen from others, share ideas, and see the real people finally.

I have been in many Perconalives before, both North America and Europe. The general theme of the conference used to be MySQL and its ecosystem. Over the years, as Percona established businesses around other open source databases, mainly MariaDB, MongoDB, and Postgresql, the conference was named after the polyglot theme. Of course, conferences worldwide have been canceled or low attendance for the past two years due to the pandemic and covid-19 side effects of international travel. Having an in-person conference was a challenge. The last conference I attended was KubeCon; LA 2021 had a similar stance on people being cautious, recently infected, or carrying the risk of the virus before or after the conference. These are the facts we can’t avoid talking about.

There were many highlights and new players or trending topics during the conference. We were by nature interested in ClickHouse and its popularity. But there were others.

Besides these, there were many recent announcements around the open source community.

The Books; as usual, there were popular books have been published during the pandemic, and it was hard to follow when everyone was remote.

To start with MySQL books, we had the following recent books related to talks and interactions. All of them were by O’Reilly Media.

Fun things also happened during the conference. MySQL booth hosted by Lefred had a game that allowed for MySQL Exam Voucher.   As of the writing of this blog I had already received confirmation from Frederic and donated this to a known MySQL enthusiast.

We’ve also had some Podcast sessions with Dave Stokes in the absence of Matt Yonkovit, which should be published in the coming weeks.

Long story short, in conclusion, it was a tremendous in-person conference. The sad news is there will be no Perconalive Europe this year; instead, Percona is handling road-show events. See you next time with much ClickHouse content and more from ChistaDATA. 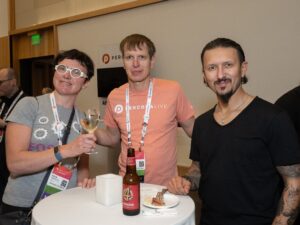 About Alkin Tezuysal 3 Articles
Alkin Tezuysal has extensive experience in open source relational databases, working in various sectors for large corporations. With over 25 years of industry experience, he has acquired skills for managing large projects from the ground up to production. For the past decade, he's been focused on e-commerce, SaaS, and MySQL technologies. Alkin has managed and architected database topologies for high-volume sites. He has several years of experience in 24X7 support and operational tasks and improving database systems for major companies. He has led global operations teams on Tier 1/2/3 support for MySQL customers. He currently holds the position of EVP - Global Services at fast-growing startup ChistaDATA Inc. He's also co-author of the upcoming MySQL Cookbook 4th Edition.
Contact: Website Twitter YouTube