Assigning Multiple Roles to a Single User in ClickHouse

ClickHouse has a feature-rich SQL driven access control and account management based on Role-Based Access control approach. The pre-defined roles determine the permissions and the level of access to the database resources. The database users are assigned one or more roles based on the business requirements. In this article, we will look at creating ClickHouse users and assign them one or more roles with different levels of access.

Let’s create a database called RBAC and create two tables with just one column and using Log table engine and insert a row of data in to them. Run the below commands as admin user with necessary privileges unless specified.

The below SQL statements will create two different roles and first role is provided read access to the first table and second role to the second table.

Let’s create a user to whom the roles will be assigned.

This user will have the default role inherited. To remove all the roles that are assigned to this user, we have to execute the following command.

Login to the ClickHouse client with the newly created user credentials.

Try reading from one of the tables and the following exception is expected.

Run the above command as the admin user with necessary privileges. After the successful execution, switch back to the newly created user and repeat the select query.

Note: In case there is an exception stating insufficient privileges , exit the clickhouse-client and login back again as the new user and execute the query.

To set multiple roles simultaneously to the same user, grant the second role to the user and set both the roles as default role for the user.

Now try reading the data from the tables, for which we didn’t have access earlier. 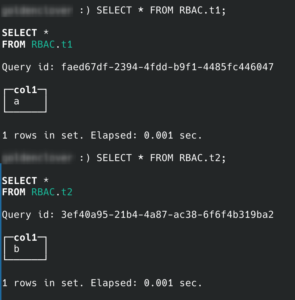 Was this article helpful?
Yes No

Can't find the answer you're looking for?
Contact Support

ChistaDATA Inc. Knowledge base is licensed under the Apache License, Version 2.0 (the “License”)

Licensed under the Apache License, Version 2.0 (the “License”); you may not use this file except in compliance with the License. You may obtain a copy of the License at