What did I mean by that?

Chistadata DBaaS is a cloud DBaaS offering around Clickhouse. The challenges here are similar to the ones faced by providers like AWS or Azure when it comes to user access management. In our case we have multiple layers of abstractions under which resources exist. Highest level is “Organization” and inside it comes a “Workspace” and there can be multiple “Clusters” under a workspace. Authorized users can create or delete workspaces and clusters and access specific functionalities within a cluster like the query editor, monitoring dashboards, backup and restore and the likes. We are required to manage access to a dynamic and customizable set of resources like workspaces and clusters. One can easily see where a conventional RBAC system falls short. A Role-Permission hierarchy cannot keep up with the nested levels of complexity this system will easily reach. The system will end up creating permissions like workspace_1_cluster_2_query, and workspace_1_cluster_3_backup which has two issues.

We can see that the structure of these resources is hierarchical and can be represented using a tree where each feature or functionality is a node which can have children depending on what action it is expected to do. For example a “Create Workspace” function is a terminal whereas a particular workspace like “Workspace-1” is not. Workspace-1 has its own page which has child components which also require access control. This recursive structure is dynamic and will change based on customer demands. 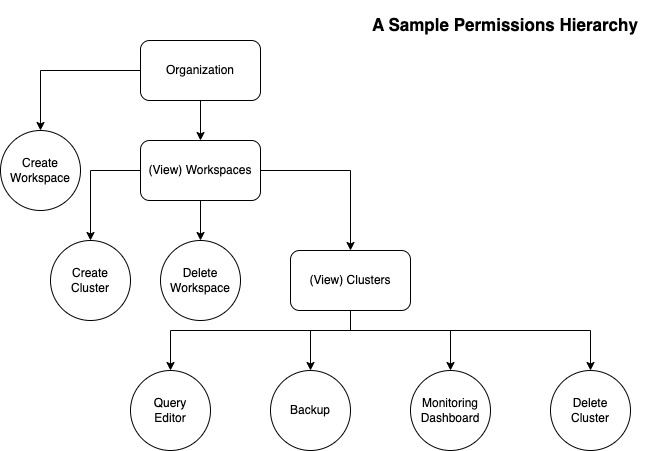 The above idea is implemented in code using three important entities.

Let us look what each of them are. 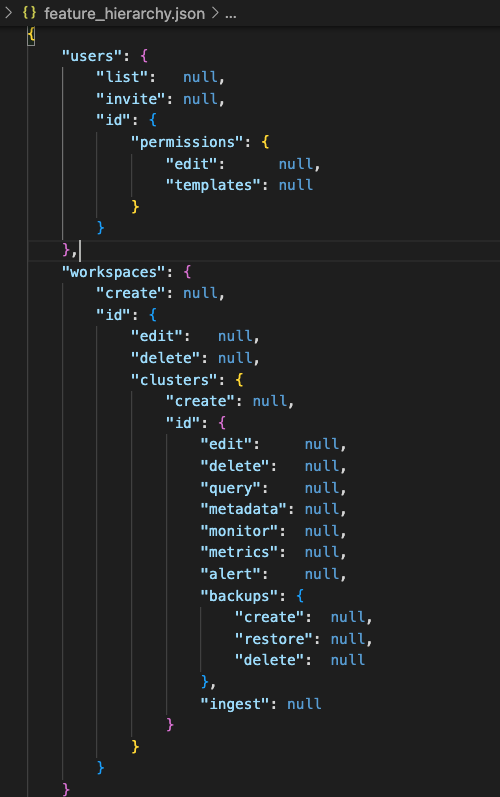 It represents the hierarchical relationship of features of functionalities that exist in the system.  It has the below characteristics. 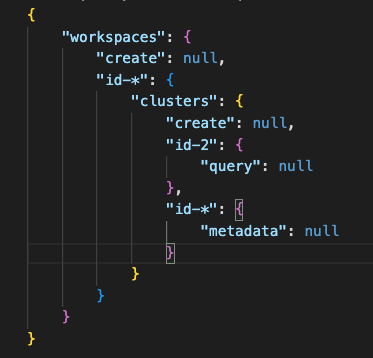 User permissions is not exhaustive as this structure may or may not contain all the resources in the system and specific to a user as this will only contain entries to which a user has access to.

As of now you might be confused about the nulls and the wildcards so let’s explore the semantics of these structures.

Both feature_hierarchy and user_permissions can be represented with a single recursive type definition in Go, which we called a PerItem, as below.

An access path is simply the path to a particular resource within the feature hierarchy. It is used to instruct the middleware function as to what access is required to access the given resource (endpoint in our case). A very basic access path can be something like /workspaces/create

Every element which is separated with a slash is a called a path_part.

But it is more than just a JSON path as it has to serve the specific purpose of securing resource. For example how can you mention that an enumerable resource with a particular id should be accessible? For example cluster create within workspace with id-12 should be accessible only to those users with access to that workspace. This is difficult with plain text as interpreting access requires extraction of parameters from the current request.
Let me introduce to you parameter extractors or param_extractors. A parameter extractor is simply a path_part which tells the authorization middleware to substitute it with unique identifiers or other fields from the different types of inputs in an HTTP request like path params, query params, JSON bodies, headers and user details from authentication cookie.

There are five types of param_extractors available.

Below is an example of param_extractors being used.

Now let’s talk a little bit about how these concepts are implemented.

The developer must specify where within the feature_hierarchy a particular resource path exists in order to enforce permissions as shown below.

The path must be an existing one inside feature_hierarchy.

The authorization middleware function verifies whether the user issuing the current request has access to the secured resource. The Authorize function is added as a gist for reference.

This is fed into a tree traversal algorithm which traverses both the user_permissions and feature_hierarchy, simultaneously, while also matching against wildcards to check if the user has access.

Fairly straightforward, right? But the solution isn’t complete yet. What about the client? How will we show and hide parts of the UI to which the user does not have access to? To understand the challenge, think about how we can hide workspace-1 while showing workspace-2. Straightforward thinking leads us to replicating whatever logic we have built in the backend in the UI side.

What we have done is to introduce a fourth type of entity which we call Effective Permissions structure. This is basically just the Feature Hierarchy where every enumerable entity is enumerated and generated specifically for the current user. 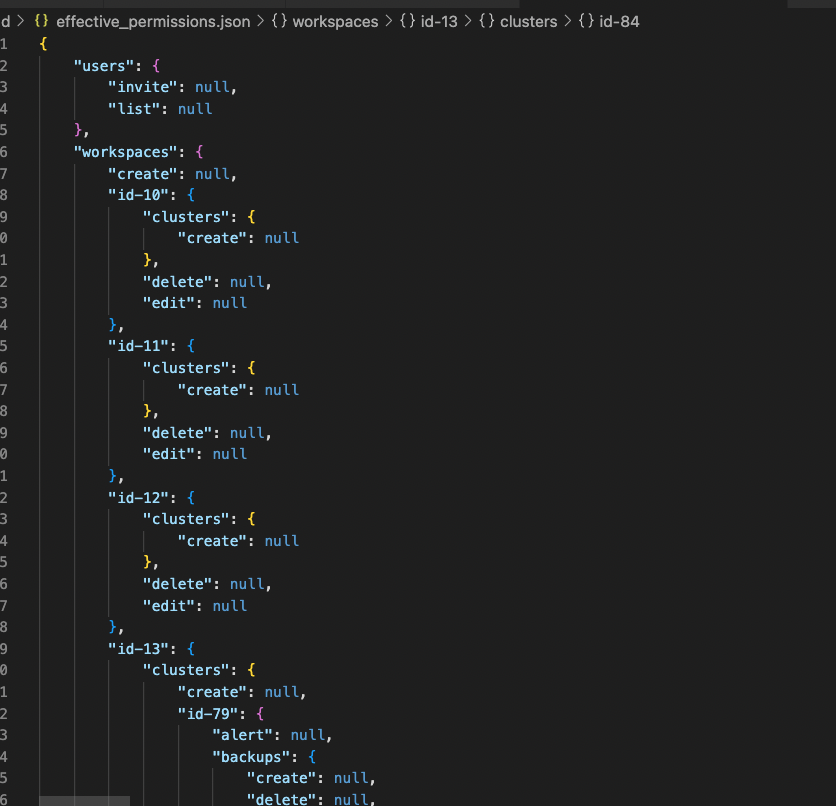 The algorithm used for this is relatively more complex than the one above used to check backend permissions.

If a user has access to resources “a” and “b” under workspace-1 and resource “c” under workspace-* (all workspaces), then their effective access on workspace-1 must be a union of both i.e “a”, “b” and “c”. Such conditions make this piece relatively tougher to implement in comparison to the backend permission check which is linear during tree traversal.

And the client simply has to do a single traversal of this structure to determine whether or not the user has access to a particular resource.

However access to some information should be restricted at the backend itself and should not be sent to client side. Information about workspaces and clusters is such. The above example however demonstrates the capability to do so, if the need arises.

Sample code for filtering out entities for which the current user does not have access:

The quest to build general purpose access control solutions is an old one and many people smarter and more qualified than the author has attempted it before. The intention here was simply to build a system that is extensible enough to accommodate the dynamic nature of a DBaaS offering while also being simple to understand and maintain. I have spent close to 10 days before finalizing on an approach, partly because of the lack of resources available on this niche topic (since most applications can live with a conventional RBAC with unidimensional permissions). I hope that this has helped.

Was this article helpful?
Yes No

Can't find the answer you're looking for?
Contact Support

ChistaDATA Inc. Knowledge base is licensed under the Apache License, Version 2.0 (the “License”)

Licensed under the Apache License, Version 2.0 (the “License”); you may not use this file except in compliance with the License. You may obtain a copy of the License at